Kanta Portrait wall 2014-2017, the first piece I've made of the project. I have been working on this concept for a couple of years now, collecting cans (i've eaten most of it), but in the last 3 weeks before i left for Taiwan, i had to complete this in a mad rush. This panel consists of 67 cans, portraits of 85 people, taken from 2014 to 2017 in Malaysia, from the Northern Belum forest, to East Malaysia of people from all around Borneo. There is a deeper discourse, but i'll leave it as it is, visually. The exhibit is up from today till the 31st March 2018. So catch it when you can.

#KantaTaiwan to future collaborations with Posak Jodian, hope to come back soon 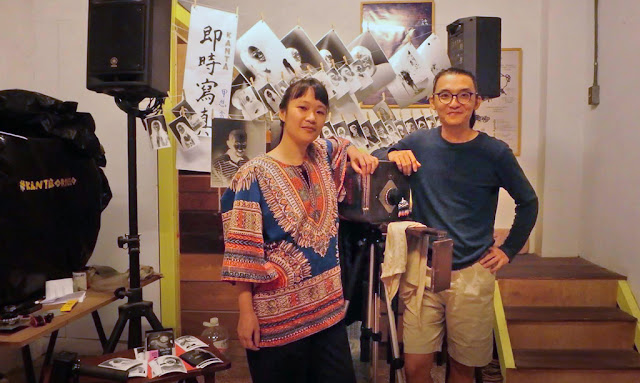 Open Studio OCAC 打開-當代藝術工作站 was a full day, inviting one or two neighbours (before the word spread around), lovely people, with Selv Grass / Luc making a few portraits too. great way of having a short conversation with the community and sitters who came from afar. language is no barrier.

School year 2 & 3 junior high on the magic of photography, Physics of light, chemistry, where science & art meets. Impromptu demonstration and conversations on the photography project exploration into Taiwan

Yesterday's revisit to Studio 94, meeting up with the team, giving them special time to make their portraits :)

Was invited to Taichung to be part of LINs PHOTO STUDIO - 林．照相館 weekend event at Taichung art & culture center at a converted factory. The only other Kamra practitioner here in Taiwan. He organised a building workshop last year too! Amazing hospitality and beautiful people of Taichung, a great photography community he is building here. much love!

Much has happened, trying hard to keep up with posting pictures of the events. Here is our first meet up photo session with Selv Grass, Taipei own version of the box camera (similar to Afghan, but so much smaller, how is that possible?!). At Halfway Café, KANTA portraits with Dubbing PHOTO - 左偏影像 at our first instant portrait session together in Taipei

Settlements in the city, exploring some leads, meet & greet with Luc as my collaborator... was a great evening meeting some native locals

Lightbox攝影圖書室 Lightbox Library, one of Taipei's finest independent photography front, photobook resource center and library. Had the privilege to meet Liang, talk politics over a great Hakka dinner. submitted the first catalogue booklet for the library too!

my first print in Taipei! (outside of KL too!) with #5elecamm #10x12. Also did a print with #1interchange. Limited internet (self-imposed), reading, contemplation & writing, my short research residency with @ocac_tw is off to a great start. Sick when landed, recuperated and ready for the coming week

pack cameras, weighed and compacted. bringing 2 cameras to Taiwan, #1interchange and #5elecamm although i can't bring my surveyor's tripod, too big and too heavy. now in total about 40 prints for 10x12" and about 200 prints for 3X5". this is my biggest travel pack, weighing in just about 28kg with luggage. that leaves about 2kg for clothes...

Hello Taipei! maybe some other parts of Taiwan too in the next few weeks